1776-1781 In 1776, Congress passed legislation that allowed Black men to enlist in the Armed Services. In response to this Congressional Act, approximately 7,000 Black men joined
the Army and defended America in the Revolutionary War.

1812-1815 War of 1812. Black soldiers are represented at the Battles of New Orleans and Lake Erie as Americans fight the British

1870 Sergeant Emanuel Stance becomes the first Buffalo Soldier to receive the Medal of Honor for valor in launching a charge against Native Americans and capturing a herd of horses from them in broad daylight. Stance was the first of 18 African American Medal of Honor winners between 1870 and 1890.

Sgt. Thomas Boyne, Indian Campaigns- for holding position on two occasions, May 19, 1879, in the Nimbres Mountains of New Mexico and September 27, 1879, at Cuchillo, New Mexico, in battles against Indians.

Second Lieutenant, George R. Burnett Place and date: At Cuchillo Negro Mountains, N. Mex., 16 August 1881. Entered service at: Spring Mills, Pa. Birth. Lower Providence Township Pa. Date of issue: 23 July 1897. Citation. Saved the life of a dismounted soldier, who was in imminent danger of being cut off, by alone galloping quickly to his assistance under heavy fire and escorting him to a place of safety, his horse being twice shot in this action.

Second Lieutenant Matthias W. Day Place and date: At Las Animas Canyon, N. Mex., 18 September 1879. Entered service at: Oberlin, Ohio. Birth: Mansfield, Ohio. Date of issue: 7 May 1890. Citation: Advanced alone into the enemy's lines and carried off a wounded soldier of his command under a hot fire and after he had been ordered to retreat.

Second Lieutenant Robert Temple Emmet. Place and Date: At Las Animas Canyon, N. Mex, 18 Sep 1879. Inducted: New York, N.Y. Born: New York, N.Y. Date of issue 24 Aug 1899. Citation: Lt. Emmet was in G Troop which was sent to relieve a detachment of soldiers under attack by hostile Apaches During a flank attack on the Indian camp, made to divert the hostiles Lt. Emmet and 5 of his men became surrounded when the Indians returned to defend their camp. Finding that the Indians were making for a position from which they could direct their fire on the retreating troop, the Lt held his point with his party until the soldiers reached the safety of a canyon. Lt. Emmet then continued to hold his position while his party recovered their horses. The enemy force consisted of approximately 200.

Captain Francis S. Dodge, Troop D. Action: Near White River Agency, Colo., 29 September 1879. Entered service at: Danvers, Mass. Born: 11 September 1842, Danvers, Mass. Date of issue: 2 April 1898. Citation: With a force of 40 men rode all night to the relief of a command that had been defeated and was besieged by an overwhelming force of Indians, reached the field at daylight, joined in the action and fought for 3 days.

Sgt. Henry Johnson, Indian Campaigns- at Milk City, Colorado on October 2-5, 1879, "Sergeant Johnson voluntarily left the fortified shelter and under heavy fire at close range made the rounds of the pits to instruct the guards; fought his way to the creek and back to bring water to the wounded."

Sgt. Emanuel Stance, Indian Campaigns- for gallantry displayed as an Indian Scout, May 20, 1870, Kickapoo Springs, Texas. Stance was the first African American recipient of the Medal of Honor during the Indian War era.

Pvt. Agustus Walley, Indian Campaigns- for action in an engagement against Apaches, Cuchillo Negro Mountains, New Mexico August 16, 1881 (Recommendation for second MOH for service during Spanish-American War). Walley is buried near his hometown of Reisterstown. Maryland.

1st Sgt. Moses Williams, Co I, Action: At foothills of the Cuchillo Negro Mountains, N. Mex, 16 Aug 1881. Born: Carrollton, La. Issued: 12 Nov 1896. Citation: Rallied a detachment, skillfully conducted a running fight of 3 or 4 hours, and by his coolness, bravery, and unflinching devotion to duty in standing by his commanding officer in an exposed position under a heavy fire from a large party of Indians saved the lives of at least 3 of his comrades.

Captain Louis H. Carpenter, Company H. Actions: At Indian campaigns in Kansas and Colorado, September October 1868. Entered service at: Philadelphia, Pa. Birth: Glassboro, N.J. Date of issue 8 April 1898. Citation: Was gallant and meritorious throughout the campaigns, especially in the combat of October 15 and in the forced March on September 23, 24 and 25 to the relief of Forsyth's Scouts, who were known to be in danger of annihilation by largely superior forces of Indians.

Second Lieutenant Powhattan H. Clarke, Company K Place and date: At Pinito Mountains, Sonora, Mex., 3 May 1886. Entered service at: Baltimore, Md. Birth: Alexandria, La. Date of issue: 12 March 1891. Citation: Rushed forward to the rescue of a soldier who was severely wounded and lay, disabled, exposed to the enemy's fire, and carried him to a place of safety.

Pvt Dennis Bell, Spanish-American War- for voluntarily going ashore in Toyabacoa, Cuba, in the face of the enemy and rescuing wounded comrades, June 30, 1898

Pvt. Fitz Lee, Spanish-American War- for voluntarily going ashore in Toyabacoa, Cuba, in the face of the enemy and rescuing wounded comrades, June 30, 1898

Sgt. William McBryar, Indian Campaigns- for bravery in battle with Apache Indians in Arizona Territory, May 15, 1890

Sgt. William Tompkins, Spanish-American War- for voluntarily going ashore in Toyabacoa, Cuba, in the face of the enemy and rescuing wounded comrades, June 30, 1898 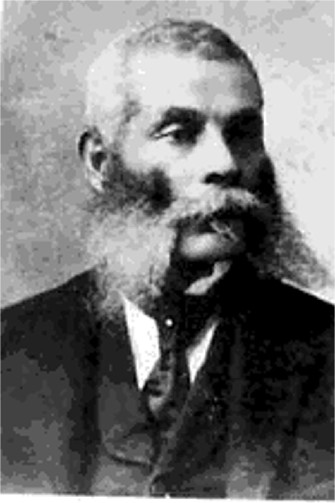 Rank and Organization: First Sergeant, Company F, 6th U.S. Colored Troops.
Place and Date: At Chapins Farm, Va., 29 September 1864.
Birth: Pennsylvania.
Date of Issue: 6 April 1865.
Citation: Gallantly seized the colors, which had fallen near the enemy's lines, raised them and rallied the men at a time of confusion and in a place of the greatest danger.

Rank and Organization: Sergeant Major, 4th U.S. Colored Troops,
Place and Date: At Chapins Farm, Va., 29 September 1864.
Birth: Baltimore, Md.
Date of Issue: 6 April 1865.
Citation: Seized the colors, after 2 color bearers had been shot down, and bore them nobly through the fight. 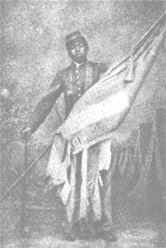 Pvt. Pompey Factor, Seminole Indian Scouts- At Pecos River, Tex, 25 Apr 1875. Born: Arkansas. Issued: 28 May 1875. Citation: With 3 other men, he participated in a charge against 25 hostiles while on a scouting patrol. Pvt. Factor is buried in the Seminole Cemetery near Bracketville, Texas.

Isaac Payne, Trumpeter, Indian Scouts. Action: At Pecos River, Tex, 25 Apr 1875. Born: Mexico. Issued: 28 May 1875. Citation: With 3 other men, he participated in a charge against 25 hostiles while on a scouting patrol and Rescued commanding officer Lt. John Bullis